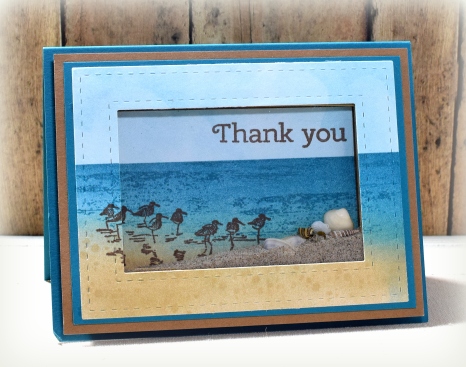 I wanted to make a thank you note for the generous couple who let us stay at their beach house last week and thought using sand and shells from “their beach” would be great in a shaker card for them.

I sponged the sand, sea, and sky with Gina K Tranquil Teal and Kraft inks on white card stock and then added the sand and water details with the same inks and stamps from the Stampin’ Up “Timeless Textures” set (retired?).  The sandpipers are from the Stampin’ Up “Wetlands” set (retired?), and the greeting is from the “Banners” set from Joy! Crafts.  Both were stamped with GKD Charcoal Brown ink.

I cut the beach scene panel with a stitched frame die (unbranded) and then backed the frame with a piece of acetate.  (I have to admit I was a bit nervous at first about cutting my “finished” sponged and stamped panel after spending all the time to create it, but I really like how the scene ended up being continuous across the raised frame and the inside portion of the shaker panel.)  I layered GKD Tranquil Teal and Recollections Kraft mats and cut a rectangle from the center (that was larger than the frame opening but smaller than the frame).  Those layers were then adhered behind the frame/acetate panel to create the raised portion of the shaker element and card front. (I added the mats in this way instead of directly to the card base because I wanted the card front to be flat instead of having the shaker panel sticking off the surface.)

To create the recessed, background piece of the shaker panel, a double layer of fun foam, cut with the same frame die, was glued to a scrap of card stock.  The portion of the sponged/stamped scene that was “left over” from the frame die cut was dropped into the opening of the stacked, foam frames.  The sand and shells were then added.

Before sealing up the shaker panel with the matted top layer, I gently wiped/patted the acetate with a dryer sheet to remove the static.  There was a lot, and the sand kept jumping up onto the acetate before it was “treated” – lol!  If you do this, just be careful not to scratch the acetate.  After the static was eliminated, the two panels were glued together trapping the sand and shells inside.

The finished shaker panel was adhered to a GKD Tranquil Teal base.  A white panel was added to the inside so I could write my message.

Over at the Modsquad Challenge Blog, the challenge this week is “A Time for Giving” where we are to “make a card to demonstrate GIVING such as kindness, thankfulness and friendship.” 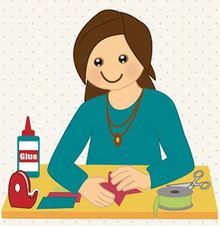 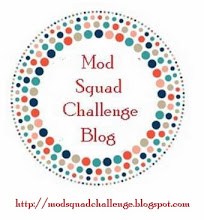 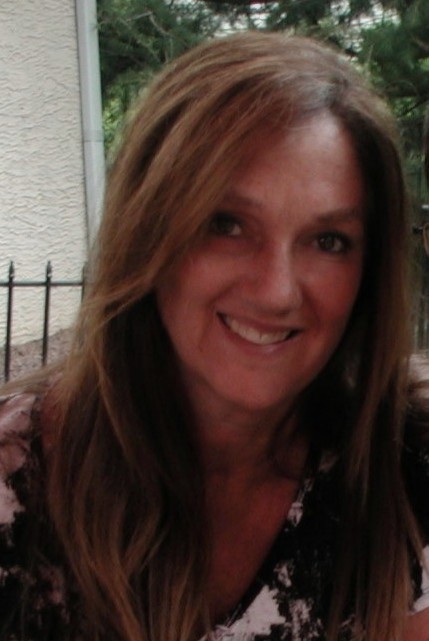